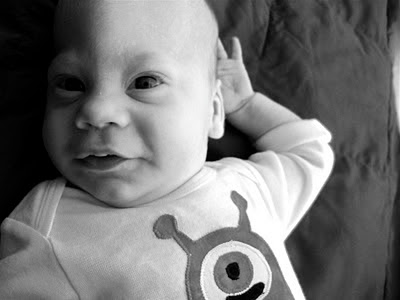 Its been a big week for Charlie.  He had two chiropractic appointments, a meeting with his ECI therapist, a spinal ultrasound and a two-month check up with his pediatrician.  Overall, Charlie is doing very well and learning all sorts of new things.  He has begun to suck on his thumb and is easily gripping hold of fabric (or mommy's hair) with BOTH hands, which is very promising.  Charlie is still packing on the pounds - he is now 12 pounds 5 ounces and almost 24 inches long.  His head circumference is small due to the craniofuse, but still growing.  Again, great news.  Because of his larger size and increased coordination, Charlie is having a much easier time taking his daily medications.  He has gone almost two weeks without a major gagging, choking scene!
The new information this week was gleaned from Charlie's spinal ultrasound, which revealed that Charlie has a tethered spinal cord.  The spinal cord normally hangs loose in the canal, free to move up and down with growth and bending and stretching. A tethered cord is held taut at the end. In children, this condition can cause the spinal cord to stretch as they grow and can lead to progressive spinal cord damage if left untreated.  We're not sure what this means for Charlie.  He will have to see yet another specialist who will take some more pictures before deciding on a course of treatment.  He may require a kind of micro surgery where they snip the attached portion of the spinal cord so that it can float free in the spinal column.  Again, we'll know more later.
Charlie's pediatrician has suggested that, given this new finding with the tethered spinal cord, he follow up with his Geneticist to see if his many odd organ and structural abnormalities aren't part of some larger syndrome.  Charlie's chromosome labs from the NICU all came back negative, but it seems unlikely that these issues are unrelated.  It seems like every time we pick up one of Charlie's rocks, we find more worms!  Charlie is taking every day and every doctor appointment in stride.  His bright light continues to shine through, reminding us all to seize the day and love each other unabashedly.
Donation Update:
An enormous thank you to all of you who've contributed to the Help Charlie Heal fund.  Because of your donations thus far, the Greenmans have been able to cover their portion of Charlie's first renal ultralsound, his initial blood labs, both chiropractic appointments and his initial MRI in the NICU.  Thank you so much for your amazing show of support and continued generosity!
1 comment: Links to this post