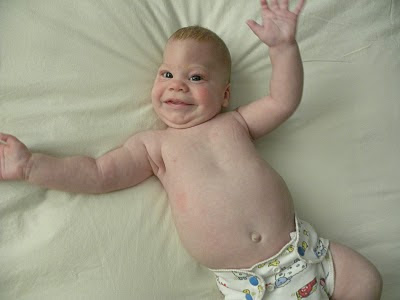 Today, Charlie had his first appointment with his geneticist.  She saw Charlie in the NICU but her office has not had an opening for a follow-up appointment until now.  It was a very informative visit where she spoke of Charlie's Craniosynostosis as it relates to his other health issues - mainly the heart and kidney issues.  As you can imagine, she had an exhaustive list of questions about Charlie's family history. Charlie's doctor has narrowed a group of genetic syndromes that Charlie may or may not have and sent him for a blood draw for further testing.  The reason to find out if Charlie has a genetic disorder or syndrome is, of course, to better plan his care.  Forewarned is forearmed!

Charlie's doctor explained that the initial blood tests he had in the NICU were to discover whether Charlie had all his chromosomes accounted for - not too many, not too few, etc.  Those tests came back fine.  She went on to explain that the initial tests can be equated to flying over a city in an airplane so that you can see and account for all the buildings.  These new tests will be able to determine if the proper mail has been delivered to each of those buildings.  So, Charlie is having the mailman tests and will have his results sometime around Christmas.

In other news, Charlie has been showing strides in his physical development this past week.  For the first time ever, he planted his feet and pushed his body into an erect position.  Hard to do when you weigh 17 and a half pounds!  His head is still very wobbly, but Charlie continues to work with his physical therapist to help him gain some head control.  His lack of head control is troublesome to his doctors but the Greenmans figure that he's got bigger fish to fry - for instance, rebuilding neuro-pathways in his brain.  As always, thank you for your notes and words of support! Charlie is lucky to have such an amazing web of love and care surrounding his every set-back and triumph.  Thank you!
No comments: 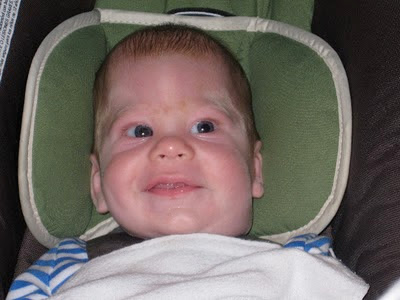 Charlie met with his Cranio-Facial surgeon yesterday.  His Craniosynostosis condition is stable for the moment, with no real urgent need to operate.  He will be meeting with the doctor again in March for a pre-op appointment to assess the best timing for surgery.  Again, Charlie's skull prematurely fused in the womb (a condition known as Craniosynostosis) and will need to be separated so that the brain has room to grow as Charlie grows.  Surgery will likely occur sometime between May and August of 2011.  The surgeon would like to perform the surgery before Charlie's first birthday.  He also said with confidence that the fused skull has nothing to do with Charlie's brain hemorrhage and that the two are not linked in any way.

What will the surgery entail?  Charlie's surgeon works in tandem with a neuro-surgeon who will assist in separating the skull plates and lifting them out of their current position.  The surgeon will then remove skull from the back of Charlie's head and swap it with the front skull plates in an effort to create a flat ("normal") looking forehead.  Charlie will only be in the hospital for two days and then return home without headgear.  Charlie's parents are very happy with this course of action and are confident that this will get him out of the woods for health issues presented by his fused skull.

Charlie will be meeting in the coming weeks with his geneticist, who is still trying to piece together Charlie's patchwork health issues.  He'll also have repeat renal and cardio ultrasounds to assess the state of the duplicate collecting system in his kidney and the enlarged PFO and murmur in his heart.  Thank you all for your sweet notes, continued financial support and love.  Charlie is rewarding us all with steady progress and big smiles.
3 comments: 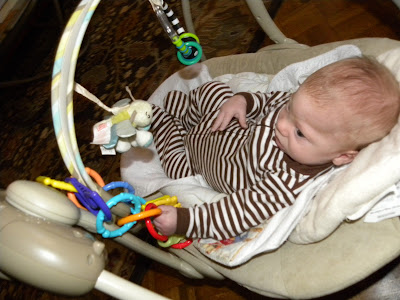 Today, Charlie did something amazing:  He saw a toy, reached for it with his left (affected) hand, grasped the toy and then tried to pull it toward him.  The implications of a physical feat like this are pretty far reaching and obviously important to his recovery from the stroke.  Only three months ago, doctors were telling the Greenmans that he may never (yes, never) use his left side.  And today, Charlie circumnavigated that grim prediction and obliterated it with one seemingly small action.  If he can do that, he can do anything.
No comments: 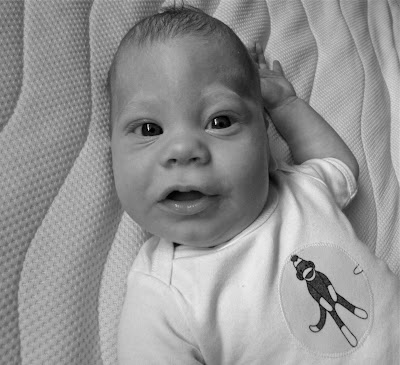 We have such good news to report!  Charlie met with his neurologist today to discuss the results of his recent brain and spinal MRIs.  First, the spinal MRI showed that Charlie does NOT have a tethered spinal cord. The assessment of the original spinal ultrasound was wrong.  No tethered cord and no spinal surgery.  Charlie's doctor presented pictures of his brain MRI.  What was once a large black sea of blood is now a small centralized dot.  You can tell that there was a past bleed, but you cannot see its original extensiveness.  There is a small puddle of fluid retention next to the bleed, but it is minor compared to the white ghost-like haze that covered the entirety his right brain in the first MRI.  The doctor explained that his body is absorbing the blood very well and that the oxygen block that was created in the brain by the hemorrhage has now almost disappeared.  The brain is oxygenating and healing. Except for the black dot of the bleed and the small pool of fluid to it's side, Charlie's brain looks quite normal.  Charlie's neurologist is going to keep Charlie on his current dose of Phenobarbital for the next three months.  He explained that Charlie has been on the same dose from birth and has since gained almost 9 pounds.  So, in effect, he has been decreasing his dose in ratio to his weight all along.  By keeping him on the same dose until February, Charlie will wean himself off the drug as he gains weight.  Its also important to mention that the MRI showed no sign of seizure activity.  He is, of course, still at risk for all the physical and mental difficulties that a grade 4 stroke presents, but the new photos show us that he is capable of recovering - that he IS recovering.  The word that Charlie's neurologist used was "significant" improvement. As always, thank you, thank you, thank you for all your powerful thoughts and loving support.
1 comment: