Charlie's story is featured this week at Mothering.com, the website for Mothering Magazine!  We are so thrilled to see that support and love for Charlie Greenman is spreading and expanding to include such a large and compassionate community.  Thank you all for sending Charlie your love, your support and your best wishes.  Click HERE to read the article at Mothering.com. 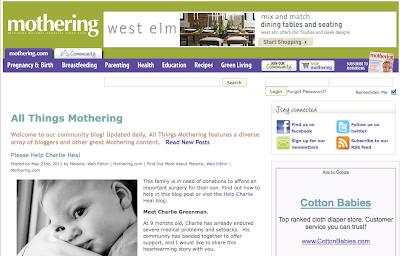 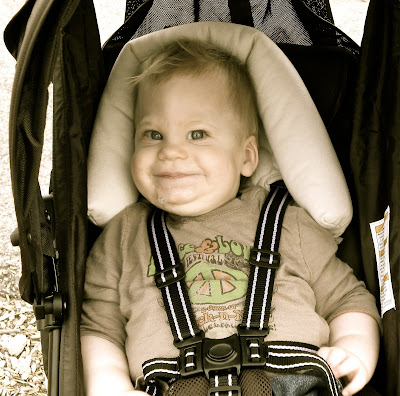 Charlie had a HUGE week.  He has been working for 9 months with family and therapists to overcome the physical setbacks caused by his stroke and this week, it all started coming together.  Here is the incredible list of physical feats that Charlie has demonstrated this week alone:


1)  Sitting in an upright position for 20-30 seconds unassisted

2)  Standing on two legs at the edge of a coffee table while supporting his own weight with his right hand and left arm.

4)  Waving his right hand in response to being waved at.

5)  Pushing his upper body up with both arms from a tummy lying position.

6)  Pulling his knees up and under his body from a tummy lying position.


As you know, these are enormous shifts for a baby with a grade four inter-cranial bleed.  The effects of Charlie's stroke are so much less than they were even three weeks ago and we're more than thrilled to hear about Charlie's amazing progress.  Go, Charlie, Go!
18 comments: Links to this post 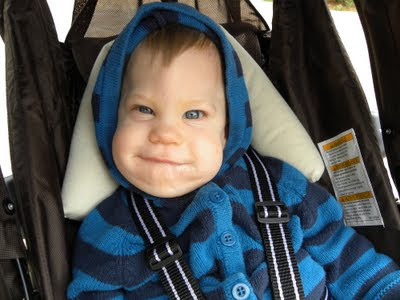 Charlie had a round of blood tests last week in preparation for his craniofacial surgery.  One of them, the PTT showed that Charlie has a "long bleed time", which may indicate that he has a blood disorder like hemophilia or a clotting problem.  Charlie will see his hematologist on August 5th prior to surgery to determine the cause of his long bleed time.  If the second round of blood tests reveal a clotting issue, then Charlie's surgeon, Dr. Fearon, will have to compensate for extra blood loss with artifical clotting agents during surgery. As with everything concerning Charlie, this is only a possibility - not a probability.  We won't know until early August.  Until then, cross your fingers and send good thick blood mojo to baby Charlie as he gets ready for surgery on August 9th.
1 comment: Links to this post 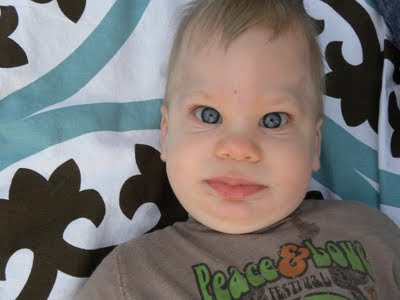 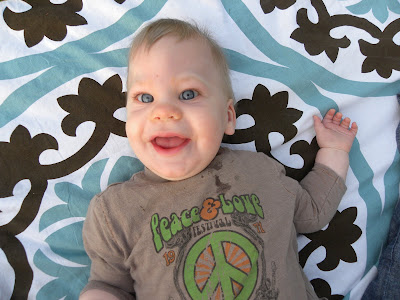 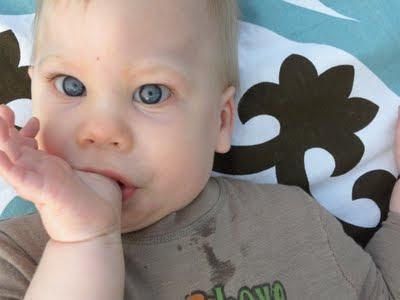 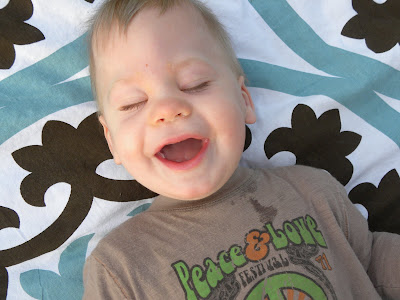 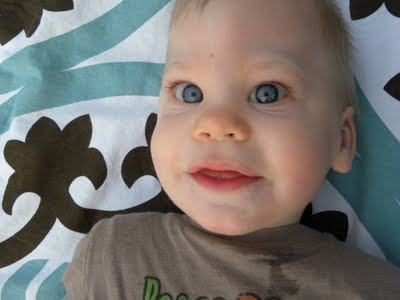 Charlie had a nine month visit with his pediatrician today.  He smiled, cooed, and wriggled around so that his Doc could see and enjoy all his new and exciting physical feats.  Generally, he's doing very well and is super healthy!  Charlie's Doctor commented on his sweet personality and his big BIG grin. Charlie's weight gain has tapered off a bit at almost 22 pounds.  His length is still off the charts at almost 32 inches long!!!  Unfortunately, his head circumference, which has been hovering around the 5-10 percentile is now below 0 percent.  The fuse along the metopic skull suture is not allowing as much growth as it was previously and the fontanel is completely closed.  The timing of his summer surgery to separate the fuse will be right on time.

Charlie's doctor filled out a four page developmental assessment for Charlie, which of course is geared towards children without a brain injury.  The assessment did not provide any new or revelatory information except to classify Charlie's development as "severely delayed".  We know, and his pediatrician knows that Charlie's reality cannot be confined or determined by a four page worksheet about whether or not he can sit unassisted or pick up a cheerio with his thumb and forefinger and stick it in his mouth.  Charlie's reality encompasses a broad spectrum of well-earned physical and mental triumphs that seem to his family, miraculous.  At nine months old, Charlie is rolling over, supporting his weight when held upright on the hip, sucking his thumb, examining his hands and feet, watching small objects come in and out of view, giggling at funny faces, eating big healthy meals and easily communicating delight, hunger, discomfort, excitement and adoration.  Charlie has his own classifications and it is impossible to assess them in the form of a multiple choice questionaire.  In the end, Charlie's pediatrician said, "He's doing great and this form doesn't really tell us anything, does it."

After a few date changes, Charlie's craniofacial surgery team has landed on a date for surgery.  August 9th it is!  The Greenman family will spend all of Monday, August 8th at the hospital meeting with Charlie's team, which includes Dr Fearon, the pediatric plastic surgeon who is leading the surgery, Dr. Sacco, the neurosurgeon, an Anesthesiologist and a battery of ICU nurses who will help him along the way.  Then on Tuesday, August 9th, Charlie will be admitted to Medical City Hospital and prepped for surgery.  Jack and Sarah will be able to stay with him until the anesthesia has been administered and Charlie is asleep.  Then they will leave him in the capable hands of his doctors for the majority of the day.  They will be able to call the surgery room for updates.  Then, they will be called back after surgery, but before Charlie is awake.  Jack and Sarah will be with Charlie immediately upon waking where they can hold him and feed him before being transferred to ICU for recovery.  The three of them will remain together through the night and remain at the hospital in recovery all day Wednesday the 10th and Wednesday night.  On the morning of the 11th, if Charlie is given the all clear, they will be discharged from Medical City and continue the recovery process at home.

Thank you to everyone who has contributed this month to the Help Charlie Heal fund.  Your donations have made an enormous dent in Charlie's medical bills. Your financial assistance has also allowed the Greenmans to pay for Charlie's initial Cranio-surgery scheduling and booking fees outright.  As you can imagine, this is a huge weight off of their shoulders.  Thank you!
1 comment: Links to this post