Charlie had a follow-up appointment today with his neurologist to look over the results of his last EEG. Unfortunately, based on those results and some observation of Charlie's behavior, Dr. Dowling is going forward with an epilepsy diagnosis.  We knew there was a possibility that Charlie was having seizures, but weren't sure until now. Charlie's seizures are tiny little blips, which present as three or four second bouts of staring into space followed by a chewing motion. They're so small that they've largely gone unnoticed.

This is, of course, a tough moment for our family because it means we're going to put Charlie back on a seizure medication. Luckily, the days of nasty Phenobarbital are behind us. Charlie will be starting a drug called Trileptal right away. Some side effects include possible skin rashes and lethargy. The goal is to allow Charlie to operate at the top of his potential. While the seizures are not depriving him of oxygen or presenting any immediate danger, they are inhibiting him from collecting and assimilating all the information in front of him. And for a kid who already has to re-route most incoming information (due to the stroke), little seizures can spell trouble as he attempts to learn and move forward developmentally.

Our neurologist was thrilled with the progress Charlie has made in the past few months noting that his ability to continue to grow and develop in the face of undiagnosed seizures is "outstanding".  Dr. Dowling is very pleased with the level of therapy Charlie is receiving and enthusiastic about our upcoming appointment to be fitted for orthotic braces. Dr. Dowling also took note of some abnormal physical behavior that Charlie displayed during the appointment - nothing specific to report here, just one more thing to observe and keep track of.

I came home with a piece of paper that says "Information from today's visit:"  It's tough to look down the list and absorb the fact that these are the descriptive terms being used for my baby:

But just when I think I'm going to lose it, or cry or yell at someone in line at the grocery store I just look at Charlie, whose countenance exudes peace, knowing and fortitude. As my husband likes to say, "I hate to give away the ending, but it's all going to be okay."  So in case you, like me, are worried by the information above, I thought I'd include a photo of Charlie's face to calm your fears. 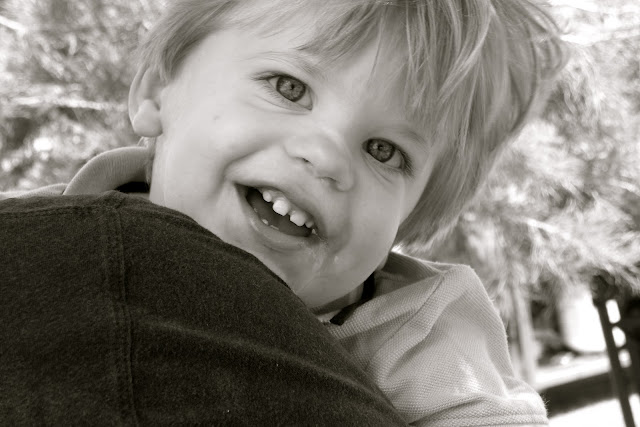 Thank you always for staying in touch with our little family. Your thoughts, prayers, kindnesses and support uplift us, sustain us and remind us that we have so much to be grateful for.


All my love,
Sarah